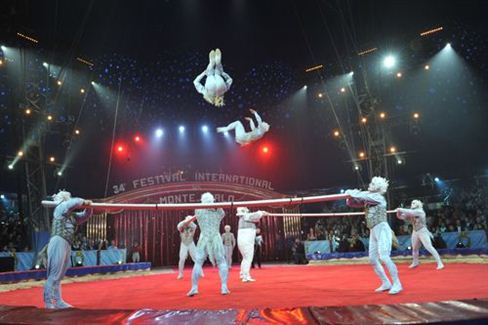 For decades, the circus has been known for its ability to brighten up the faces and spirits of adults and children alike. As a young child, Prince Rainier was fascinated with the circus world. So in 1974, he created the Monte-Carlo International Circus Festival to showcase the world’s greatest Big Top performers.

Each year hundreds of acts petition to be a part of this weeklong ceremony, during which the two best performances are crowned with the coveted Gold and Silver Clown awards. Held every year in mid-January, the event features spectacular animal acts, uproarious comedic performances, and masterfully choreographed acrobatic feats. Each act is judged on its technical difficulty and creativity by a panel composed of seasoned circus professionals from around the world. Presiding over the panel, H.S.H. Prince Albert II and his sister, H.S.H. Princess Stephanie (who serves as President), traditionally open the star-studded festivities.

Our events agency is based in the heart of the French Riviera: Monte-Carlo (Monaco). We have been producing and managing various upscale events for years in Cannes and Monaco as well as abroad. From small groups celebrating a birthday to big companies launching a new product, we will be at your entire disposal to offer event production solutions.